Jacob Hazell is the devastated boyfriend of English YouTube and television presenter, Emily Hartridge -who was tragically killed on Friday, July 12th.

Jacob’s lady was a well known media personality, she had built up a huge social media following with more than 340,000 subscribers on her YouTube channel, and a big presence on Twitter and Instagram.
According to reports, she died on Friday after her scooter crashed with a lorry less than half a mile from her home in Battersea, South London. Emergency services were called, but Hartridge was pronounced dead by the London ambulance service at the scene. She was 36. Her death became UK’s first fatal scooter accident. She was 35.

Ironically, Emily actually staged her own funeral three years before her death. She came up with the grim idea following a “quarter life crisis” for Channel 4 show ‘Oh S***, I’m 30’.

Emily was born May 25, 1984; in London. She was one of four sister. Her two younger sisters are twins and are named Alice and Jessica. Her older sister’s name is Charlotte. In addition to her sisters she is also survived by her parents. 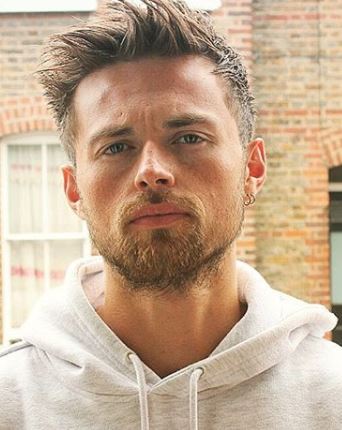 Emily gained notoriety for her YouTube series 10 Reasons Why. Her first YouTube video was titled “10 Reasons Why I Wish I Was 12 Again.” She decided to make it a series. The weekly series became so popular that the UK’s Daily Mail and the US’s Huffington Post posted recaps of her episodes after they were uploaded on Mondays. Her channel also offered health and lifestyle advice.

From then, she hosted a variety of television and web series, like Virgin Media’s YouTube show Jacked In. She also became an interviewer of celebrities at press junkets. She had interviewed A-listers such as Hugh Jackman and Eddie Redmayne.

Emily was paid tribute by Jacob Hazell -whom she was in a relationship with. He posted a tearful Instagram video.
“Emily was the person who encouraged me to talk about how I was feeling so I just wanted to put a video out here to say thank you and let people know I’m OK,” he said.

27-year-old Jacob Hazell is a personal trainer. He describes himself on social media as a recovery addict. He is an advocate on anxiety and depression and according to his LinkedIn, he is the studio manager of a gym and training facility called F45 Training -which offers functional training and was named ‘best class in London’ by QG.

Jacob who also goes by Jake, began dating Emily in November 2018 and the pair moved in together in June 2019. The couple was preparing to start a family, just days before her shock death.
Find Jacob Hazell on Instagram here.