Betty DeGeneres is the proud mother of actress, funny woman and TV personality, Ellen DeGeneres. The mother-daughter duo has a really close relationship.

Betty’s famous daughter recently opened up to David Letterman about the fact that she was sexually abused when she was a teenager by her mother’s husband. The 61-year-old comedian said her stepfather used her mother’s mastectomy as an excuse to molest her when she was 15-years-old.

At the time her mom, Betty DeGeneres had just been diagnosed with breast cancer and had one of her breasts removed. But who is Ellen’s mom? 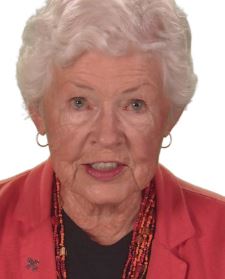 Betty DeGeneres was born Elizabeth Jane Pfeffer on May 20, 1930. The Louisiana native attended Louisiana State University for two years, studying speech. While in college she was active in theater performing in a number of plays. After college she made a career as a speech therapist.

She and her first husband Elliott DeGeneres were married in 1952. The couple welcomed two children, son Vance and daughter, Ellen. However, Betty and Elliot divorced in 1976. She remarried to Roy Gruessendorf, however that marriage also ended in divorce before his death in 1997.

Betty was put on the map after her daughter’s much publicized coming out in the late 90’s. Since then, she has become her daughter’s biggest fan and supporter. She has penned two books Love, Ellen: A Mother Daughter Journey and Just a Mom. In both books she talks about her and daughter’s journey. Betty DeGeneres has also been featured on TV, she appeared in her daughter’s sitcom Ellen and is often an audience member of The Ellen DeGeneres Show.

At age 50, she completed her master’s degree in speech pathology. Betty, a breast cancer survivor, is also known as a passionate LGBT-rights activist, she is an active member of PFLAG, (Parents, Friends, and Family of ******** and Gays).