Ed Smart is well known as the father of kidnapping survivor Elizabeth Smart -who was abducted for nine months over a decade ago. The 64-year-old father of six has come out as gay.

Ed’s daughter is well known as an advocate for kidnapping and sexual assault survivors -this after she made international news for being kidnapped at age 14 back in 2002. Elizabeth was abducted from her home in Salt Lake City and held captive for nine months. She was repeatedly raped and drugged by her captors Brian David Mitchell and Wanda Barzee.

Elizabeth is the second of six children born to Edward and Lois Smart. They are also parents to Mary Katherine Smart, Charles Smart, Andrew Smart, William Smart and Edward Smart. 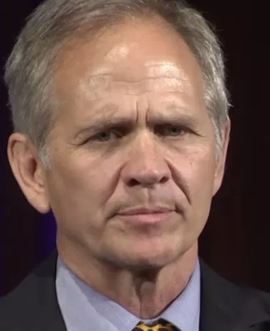 Edward Smart was born May 18, 1955 -in Salt Lake City. He attended college at George Washington University where studied finance and got an MBA in 1991. He holds a BBA in Finance and an MBA with an emphasis in Urban Planning.
Following his daughter’s miraculous return, Ed has been an advocate for missing people. He has lobbied Congress and the Senate tirelessly to prevent further abductions and to rescue missing children. He’s been involved in numerous conferences designed to further the awareness and cooperation in the area of child protection within law enforcement, media, and the public.
Smart made headlines last year following Wanda Barzee’s release from prison -telling media he believed that Barzee was still a threat.

Ed Smart is also known as a successful real estate developer. Ed is the owner of real estate and mortgage company based in Salt Lake City, Smart & Company.
Smart who has been married to wife Lois since 1986 and has been a Mormon most of his life – came out as gay in a Facebook post where he also announced his divorce from his wife. Lois Smart filed for divorce on July 5.