Robbie Arnett is the musician boyfriend of actress, Elizabeth Olsen -the couple who has been dating for a few years is said to be engaged.

According to reports Robbie popped the question to the 30-year-old Avengers actress after three years of dating. The two were first romantically linked back in March 2017 after they were spotted walking closely together in New York City.
They made it official that September when they attended the Gersh pre-Emmys party together where they were photographed.
The two are known for keeping their relationship very private, however, they haven’t escaped the lens and have been seen together on numerous occasions, including a Mexican vacation and out on the streets of New York City. They also spent last summer in Italy.
This isn’t the first time Olsen is engaged, the California native also known as Lizzie Olsen and younger sister of the famous Olsen twins -was previously linked to Narcos actor Boyd Holbrook, but the two called off their engagement in 2014 after three years of dating. 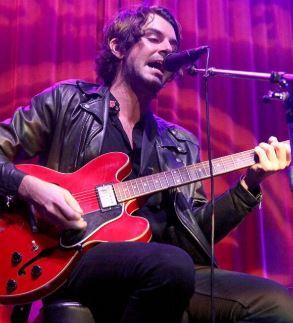 Like her lady, Robbie Arnett is no stranger to showbiz, he is the lead singer for Milo Greene, an indie pop quartet that formed in 2009. Robbie who was born Robert Nicholas Arnett on March 3, 1992; describes himself as a film fanatic, who began Milo Greene as a way to create music for movies and television. Some of his original work has been featured in films like Fun Size and on shows like Conan.

He started Milo Greene in 2009 while attending University of California, Irvine -with several of his college friends. The singer and multi-instrumentalist debuted in 2012 with their self-titled album -which saw chart-topping succes. They went on to release two EP’s and a 2015 sophomore album called Control and have since appeared on Last Call with Carson Daly and performed on Late Show with David Letterman and The Tonight Show with Jay Leno.
His most recent work is a third EP compilation, titled Never Ending. The band recently wrapped up a four-date tour along the West Coast.