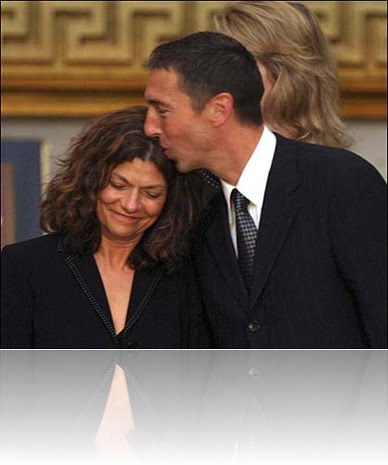 Former US president Ronald Reagan was worried his son Ron Reagan was gay when he announced his decision to quit college at Yale to pursue a career as a dancer, people even suspected his marriage  to his still wife Doria Palmieri Reagan was a sham. So what is the story there and most importantly what do we know about Ron Reagan’s wife Doria? do they have children? is Doria Palmieri  still alive?

The story  about President Reagan concerns over his son’s sexual orientation was republished by the New York’s Page Six; where Christopher Buckley, the son of Pres. Reagan’s close friend William F. Buckley recalls the conversation  his father once had with  his friend..

“My father and Reagan were close, and my dad had always acted as a kind of godfather to the Reagan children, so Reagan called up my dad and expressed to him his worry that this meant that his son played for the other team,” Christopher said.

“My dad ventured the opinion that all people in the arts might not be gay, but there wasn’t much he could really say about this, and, of course, we now know Ron’s not gay.”

Ron Reagan, 56, born Ronald Prescott Reagan on May 20, 1958 in L.a to the late Ronald Reagan and his second wife Nancy has three older siblings, Patricia Reagan aka Patti Davis, 62,  the first child born to his father marriage to mom Nancy, and Maureen and Michael from his dad’s first marriage to actress  Jane Wyman, Michael  was adopted as an infant and Maureen passed away in 2001 aged 60, from melanoma, there is also Christine Reagan the baby girl born prematurely  in June, 1947.

Ron entered Yale in 1976, quitting after one semester to become a ballet dancer, he must have been a fine good one because he joined the Joffrey Ballet in Chicago,  the dance company famous not just for his fine dancer but for the way they cautiously pick their future apprentices.

Ron and Doria met in 1977 when he was 20 and she was 26, at Stanley Holden’s dance studio in L.A. he was  still in his early stages as a dancing student and Doria helped run the place, she went to live with him when Ron won a scholarship to Joffrey. They got married on November 24, 2008  at the chambers of Acting New York Supreme court, Doria didn’t wear a wedding gown but  a bulky crewneck sweater, blue jeans and cowboy boots; Ron didn’t wear a tuxedo either, he  was in jeans, a red sweatshirt and running shoes. Doria and Ron had no children and they lived in Seattle, Washington.

Doria Palmieri Reagan, 62, the daughter of an Italian retired scenic designer for Twentieth Century-Fox, is a philosophy graduate from California State University, she then became a clinical psychologist