20-years-ago model and actress, Donna Peele became the first woman to have said “I Do” to 50-year-old actor, Charlie Sheen, who is currently said to be HIV positive.

Donna Peele, a model, met Charlie while working together in New York. The leggy, dark haired woman and Sheen, were filming a cigarette commercial together in 1995. They got married only six weeks later.

Sheen was on the stand during madam Heidi Fleiss’ prostitution trial when he said he and Donna Peele were getting married. It took weeks for the couple to get marry and months as husband and wife.

Donna Peele and Sheen lasted as husband wife for six months. The couple tied the knot on September 3, 1995. By November 19, 1996, they were divorced.

She was born, as Donna Janine Peele and online records show, she has lived in Orlando, FL; New York, NY; and Los Angeles, CA. 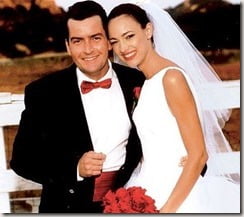 According to People, Charlie said of his soon-to-be bride, “She’s an angel sent from heaven to take me through the rest of my journey,” A year later, the actor said about their split: “I couldn’t breathe, I had to come up for air.” He went on to explain, on Entertainment Tonight, why he elected to choose divorce: “You buy a car, it breaks down, what are you gonna do?”

Donna Peele is now on her 40’s and after her marriage to whom would become one of Hollywood’s most controversial figures, ended, she pretty much vanished from the spotlight.

Following her marriage to Donna Peele, Charlie has been married two more times. Probably his most troubled marriage, has been to second wife, actress Denise Richards with whom he was married from 2002-2006 and fathered two daughters with.

His third nuptials were to real-estate investor Brooke Mueller. They were married from 2008-2011 and the couple produced twins.

What do you think Donna Peele would tell Charlie about his HIV diagnose?