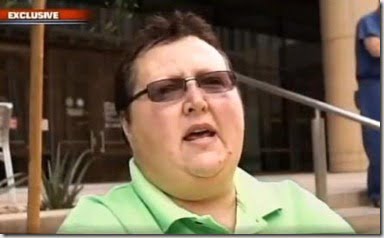 Jodi Arias, who is behind bars in Phoenix accused of killing her ex-boyfriend Alexander Travis in 2008, has been communicating with the outside world through her Twitter account, managed by her very close friend 50-year-old Donavan Bering, who says they speak every night and they go over what she wants to be tweeted.

Donavan “Donnie” Bering and Arias became friends in the Estrella Jail when they were imprisoned there at the same time, but since her release Bering has kept in touch with Arias and has become close to her family.

Donavan Bering said that Arias’ family was “very, very upset” and that according to Arias’ mother, Sandy, she felt betrayed for not being in the courtroom to hear Judge Sherry Stephens announce a mistrial on Thursday. Bering added that Sandy wasn’t notified in advance by court officials, as she heard the news on TV.

“She would never abandon her daughter,” Bering told Arizona NBC affiliate12 News. “Her mom was mad, she said ‘I’m very, very upset about this.’ We were told [the announcement] wasn’t gonna be a verdict. She was just shocked — there’s two families that have to put their life on hold.”

She said the guilty verdict was a shock to the family, which is now fearful of the future.

Bering also said Arias is “not well” after a jury found her guilty of slaying her boyfriend. The Maricopa County Sheriff’s Office has put her on suicide watch.

“We are all very, very scared and sad,” Donavan Bering told RadarOnline.com via text message on Thursday after speaking to 32-year-old Arias.

Arias’ Twitter account had disappeared after the verdict but Bering still manages it, saying she took it down “for a few days” but added it will be put back up soon.

“I find it really hard to believe what happened, knowing her,” Donvan Bering said. “Never, ever have I seen her raise her voice, seen her yell, seen her do anything. So when I’m sitting there in court, it blows me away because I’m sitting there knowing the person that I know, seeing her and talking to her and see how much compassion she has.”

Donavan Bering was born on October 24, 1962, and is originally from Arizona, currently living in Phoenix. Before that, she lived in Anchorage, AK from 2000 to 2002. She went to South Kitsap High School in Port Orchard, WA, and graduated in 1981. After high school, Donavan Bering went to Grand Canyon University to study pyrotechnics in Phoenix, AZ.