Willow Bay is the beautiful wife of media exec and film producer, Bob Iger -best known as the Executive Chairman of The Walt Disney Company.

Willow’s husband assumed the chairman position earlier this year, he previously served as Disney’s CEO for 15 years. Her husband is known as one of the ‘World’s Most Powerful People’

Born Robert Allen Iger on February 10, 1951; the NY native attended Ithaca College and officially joined the Disney senior management team in 1996 as Chairman of the Disney-owned ABC Group and in 1999 was named president. From 2000-2005 he served as President and Chief Operating Officer.
During his tenure as CEO, Iger expanded on Disney with a number of acquisitions including Pixar, Marvel, Lucasfilm and 21st Century Fox.
He was inducted into the Television Academy Hall of Fame in January 2020. 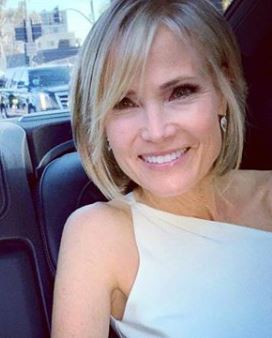 Willow Bay is actually his second wife. Bob was first married to Kathleen Susan Iger back in the 90’s, with the couple divorcing in 1994. From his failed marriage, he is the father of two daughters, Amanda and Kate Iger.
He and Willow Bay tied the knot in 1995. Willow and her husband have since welcomed children of their own. The blonde is the mother of two sons, Robert Maxwell born in 1998 and William, born in 2002.

Willow Bay was born December 28, 1963; the New Yorker attended University of Pennsylvania and holds an MBA from New York University’s Stern School of Business.
She began her career as a model and later transitioned to Television as a broadcast journalist. She is in addition an editor and author.
Willow’s prominent broadcast experience includes reporting and anchoring for ABC News’ Good Morning America. She also worked for CNN and NBC.
Bay is also the author of Talking to Your Kids in Tough Times: How to Answer Your Child’s Questions about the World We Live In, published in 2003.