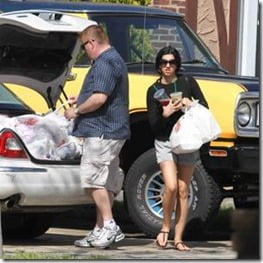 Denise Batista seems to be following on the footsteps of Meaghan Mapes who in 2010-2011 was romantically involved with New York City’s Councilman Dan Halloran. Denise a student and tennis player at the John Jay College of Criminal Justice was born July 26, 1989. Her parents, Dilenia y Domic Batista are from Hyde Park , NY. She  has an older sister named Darleny who is 26 years old.

Although the path might have been opened by Mapes in the past, meaning when that relationship got out he lost his marriage to-still wife- Cynthia, who filed for divorce in 2011 but it has not been finalized. Denise who is 24 years old might have thought well he is a “free man after all” right! But a question comes to mind, could the girl who is only 24 might actually bee in love? What do you think?? On Friday, the couple were spotted leaving his home in his Jaguar and returning an hour later holding Starbucks cups and groceries!

Plus, Halloran isn’t hiding his relationship. He has posted pictures of Batista, a yoga enthusiast, on Facebook and in March changed his status on the site from “it’s complicated” to “in a relationship.” They even began showing up at events, including last year’s Bell Boulevard Christmas-tree lighting, in his white Jaguar. He is certainly excited by his newest relationship! Batista who is 17 years younger than Halloran first hooked up with the very public figure man while she was working for him, an “absolute no-no” under city and council rules! Someone might want to give a copy of this rules to the man! I mean this is not his first time! For staffers it was pretty clear last fall that Batista, who filed and answered phones, was dating her boss.

Batista has since quit her intern job and by doing that they were free lovebirds, at least that’s what she thought. Despite they are not hiding their relationship Halloran is facing much more serious allegations when on April 23 he pleaded not guilty on the charges of his  alleged bribery plot to get Sen. Malcolm Smith onto the GOP mayoral ticket; He could face up to 45 years behind bars if convicted. He has been stripped of his council committee posts, but has said he has no plans to resign!

On top of that Council Speaker Christine Quinn told The Post over the weekend that she plans to launch an ethics probe into Halloran’s extracurricular activities with the two staffers!

Dark hear, young and pretty Batista has not said anything about  it.

Well I guess if I were her I would be on top of the next young thing on his staff!