DeMario Jackson is one of 31-lucky fellas casted in the current season of the ABC hit TV show, The Bachelorette. In season 13, we’ll get to watch DeMario Jackson and other gentleman trying to get hold of Rachel Lindsay’s heart.

Let’s focus on DeMario Jackson for a minute. The Los Angeles resident is said to have had the nerve of entering the show while being in a relationship but until all these nasty rumors are confirmed we’ll give him the benefit of doubt.

Jackson is one of the four contestants who Lindsay met on the After the Final Rose Special from Nick Viall’s season of The Bachelor. He is the guy who took fake Las Vegas tickets for him and Lindsay to elope… showing his confident self already.

Accoridng to his LinkedIn profile, DeMario Jackson works at Michael Page and calls himself a, recruiting consultant. 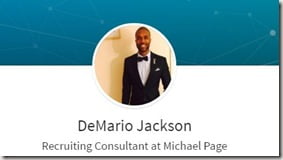 From 2005 until 2009 he attended The Fashion Institute of Design and Merchandising obtaining a Bachelor of Arts, Product Development. The 30-year-old previously attended the California State University, Fresno from 2004-2005.

Since graduation, DeMario has held a number of different positions including a stint with Lacoste in 2007 working as an assistant  general manager. In 2009 eh joined the Amidi Group where he developed as a Community Outreach Manager.

He later worked as a Director of Special Events for the Carnival Cruise Line. Before he landed his current job he worked for a year The Creative Group.

The executive recruiter is based in Century City, California and is super, super, super close to both his mother and his younger sister, Jahryn Browne -whom he refers to as ‘sissybear’ and ‘mommybear’ respectively. 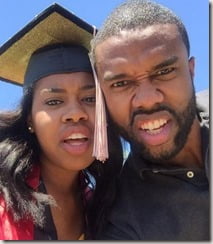 Jahryn graduated from Fresno State earlier this month and Jackson wrote an emotional Facebook post which in part reads:

My kid sister is my heart, best friend, inspiration to become a better human and when she first started college I was scared!!! I was scared because a young girl in a new city without her big brother/parents usually means; back-page champagne guzzling bottle rat who ages bad… but she didn’t do any of that. She did however graduate *** Laude, worked full time with an internship kept me in the loop with cool memes/gifs and she did this all without complaining. (JK she complained every fucking day and I have the voicemails and text messages to prove it)

It will be a shame if DeMario Jackson turns out to be a cheating *******, after proving he is such a cool-big brother.

Thoughts on the Bachelorette contestant?