Patricia Lewis is the wife of actor John Clarke, best known for his many years as Days of Our Lives‘ lawyer, Mickey Horton.

Patricia’s actor husband is said to have died at the age of 88. The veteran star passed away on Oct. 16 due to complications from pneumonia , reports say.
John Clarke, was born April 14, 1931; the South Bend, Indiana native spent nearly four decades playing Mickey Horton on the NBC soap opera. He also starred in many films, including The Satan Bug, Man Missing and Burma Patrol.

Over the years, he appeared in the TV series Gun Smoke, Have Gun Will Travel, Twilight Zone, Maverick and Dr. Quinn-Medicine Woman. Clarke also performed as a leading man in more than 75 plays at the Tenthouse Theater in Chicago, IL.
In 1979, Clarke’s work on Days earned him a Daytime Emmy nomination for Outstanding Actor in a Daytime Drama, and he later received the Daytime Emmys’ Lifetime Achievement Award in 2004.

The actor is survived by his wife, Patricia Clarke; their children and grandchildren. 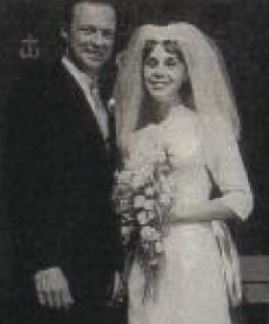 Patricia Clarke who goes by Patty, was born Patricia Lewis. She is a former ballet dancer. She and John became husband and wife in 1964. The two met at a wedding reception, John said during an interview the two were sitting at the same table and he asked her to the dance floor. John called her three days later and on their first date they went out for ice cream. The two were married three months later.

Patricia Lewis and John Clarke had three children, two daughters Melinda, Heidi, and a son, Joshua. Sadly, the couple’s daughter Heidi -who was studying as a scenic designer, passed away in 1994 from a heart tumor. Melinda who followed her father in the acting world, played Faith in Days of Our Lives.
And the couple has three grandchildren Kathryn, from Melinda and ex-husband Ernie Mirich; as well as Natasha, and Jacob.