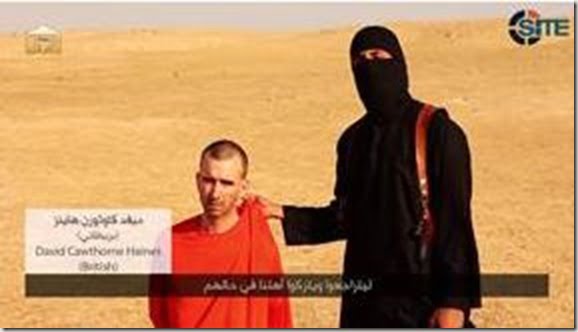 A third captive has been threatened by ISIS as word of the execution of U.S journalist Steven Sotloff is being studied by Whit House intelligence officials as to determine its authenticity; his name: David Cawthorne Haines.

In the video shown by The SITE, Mr. Sotloff describes himself as “paying the price” for the Obama administration’s decision to strike ISIS targets in Iraq. The same masked fighter with British-accented English who appeared in the video of Mr. Foley’s beheading also appears beside Mr. Sotloff, asserting, “I’m back, Obama, and I’m back because of your arrogant foreign policy towards the Islamic State.”

Haines is a former British soldier who worked for a string of aid organizations, NBC News reports. An official with Nonviolent Peaceforce, a civilian peacekeeping group, confirmed that the man in the video did security work for them in South Sudan in 2012 and was working for another aid group when he was reported abducted in early 2013 in Syria.

Nonviolent Peaceforce director, Tiffany Easthom describes said that Haines was “ex-British military and very familiar with insecure locations … He was very caring, had a good sense of humor. He left the military and wanted to work for NGOs [non-governmental organizations].”

According to  his LinkedIn, Mr. Haines attended Perth Academy and is the director of a Croatia-based company that supplies equipment for the catering industry called, Astraea, but for over a decade, Haines covered various positions covering security and threat assessments in a number of different countries.

A fragment of his summary reads

I have gained over 23 years of working experience in ever increasing positions of responsibility within private, NGO and military environments. This has allowed me to hone my skills in negotiation, programme management, operations and security to the highest standards as a pro-active team member as well as leading that team.
My most recent position was responsible for all secure operations of NP South Sudan and included the following: Establishment of Safety & Security protocols, Field Security Plans, Training of Staff, threat assessments and logistics for remote field offices. I was instrumental in the development and updating of the global Security & Safety Manual which has now been adopted by NP.

As Country Director for Handicap International, Mr. Haines was responsible for the establishment of the HI Libya programme and was able to co-ordinate and expand the project into a programme of activities within AVR, RE and demining related to the Mine Action Strategy in accordance with the strategic plan as developed by myself and SM team. This realised the growth geographically to a nationwide presence in Libya as well as lobbying of $2.6 million and a projected $4 million for 2012.

In a 2011 article titled “Educational approaches to tackling disability in war-torn countries” David Haines, the Chief of Mission in Libya for Handicap International says,

Children are most vulnerable in sites heavily contaminated by remnants of war, where destroyed armored personnel carriers, tanks, and other unexploded ordnance pose a high risk of mine injuries…

Reports say family members have been contacted but they are not making any comments for now.