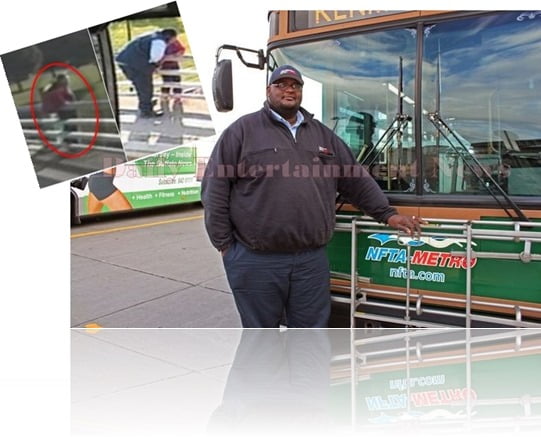 Meet Darnell Barton, he is not just a regular NFTA Metro bus Driver, he is the heroic man, who pulled off to the side of the road after he watched a young woman getting top jump to her death off a bridge. On October 18th, 38-year-old Darnell Barton from Buffalo pulled from the regular bus stop at Kinley High School, the same way he did weekday,  he and over 20 young students were heading towards Elmwood avenue when he noticed a woman on the opposite side of the railing leaning out over the traffic below in the Scajaquada Expressway, he knew what she was about to do, and he also saw how two pedestrians and a guy in his bicycle passed next to her and didn’t do “NADA”.  He was not going to do the same!! “I didn’t think it was real with everything else going on around her. Traffic was proceeding as normal and a couple of pedestrians walked right by her and a bicyclist rode by. I mean, they were inches from her,” said Barton, who instinctively stopped his bus and opened the doors. “Do you need help?” he asked “She turned back to look at me and then back at the traffic and that’s when I kind of lunged and got my left arm around her body,” Barton said. “I asked her, ‘Do you want to come on this side of the guard rail now?’ and that was the first time she spoke to me and said, ‘Yeah.’ ”

He continued to talk to her and convinced her to get back to the other side of the railing and sat with him on the sidewalk so they could talk.. We both sat on the sidewalk right there on Elmwood Avenue and I asked, ‘Where are you from?’ I tried to get some information. She wasn’t forthcoming. She looked down and then looked up and said, ‘You smell good.’ ”

“She wasn’t that detached,”

As they were talking in the sidewalk, the young student inside the bus watch quietly at the amazing scene they just witnessed, about that time an state prison corrections officer,  pulled his vehicle over, to check about what was going on, then the Buffalo police and firefighters arrived, as did police from nearby SUNY Buffalo State and the Buffalo Psychiatric Center.

Only when Darnell knew she was safe he left the unidentified 20-year-old in their care, without knowing why she wanted to take her life.

As Darnell got back to the bus the young boys and girls received him with around applause, each and everyone of them shook his hand on their way out of the bus.

“They were great. They sat there quietly. It was an encouragement to me. Oftentimes we look at young people and we forget we were young,” he said. “As each of them got off the bus, they shook my hand.”

You would think Darnell bragged about his heroism at work, but you are wrong, as a matter of fact the guys at NFTA learned about  it until recently..

“We are all extremely proud of Darnell’s heroic actions,” said Kimberley A. Minkel, the NFTA’s executive director. “His quick and calm response during a very stressful situation speaks volumes about his character and unwavering willingness to help someone in need.”

“Darnell won’t tell you this, but when he went back on his bus, the McKinley students gave him a round of applause. That’s because of Darnell’s modesty, which speaks to his demeanor of being very humble.” said C. Douglas Hartmayer, NFTA spokesman

Darnell Barton was born on March 01, 1975 in Buffalo, NY. He is happily married to his beautiful wife Patrina a 37-year-old Nurse at PSA Healthcare, you couldn’t be more proud of her amazing husband.