Dani Golightly is the woman who released bizarre footage claiming to have been assaulted by none other than her alleged boyfriend, Anthony Cumia.

Dani Golightly, apparently uploaded the video/evidence of the incident to Periscope. Dani Golightly was born, Danielle Brand in 1989. Dani Golightly is the daughter of Stand-up comedian Vinnie Brand, who owns The Stress Factory comedy club in New Brunswick, New Jersey.

Anthony Cumia is the former host of The Opie and Anthony Show (The O&A Show) and is currently the host of his own show.

In 2008, when Dani was 19, she appeared on The Opie and Anthony Show. During her interview, Cumia tells his audience, he is friends with Danie’s father and that he has known him for 15-years.

Sources close to the couple told Page Six, Dani Golightly has been living with 54-year-old Cumia for over a year. She allegedly brags about not having to “pay for anything” because of Cumia’s money.

A scared Dani Golightly can be heard on the video saying, “Hi, I’m in Long Island, I got my hand broken, I’m waiting for police to come … I tried to call the police, but [Cumia] turned the phone off.”

The video abruptly cuts away and then continues, “Oh my God, don’t hit me!” Dani Golightly then yells “Stay away from me!”

Once Cumia appears on the video, he can be heard saying: “Ladies and gentlemen, it’s the Anthony and Dani Show.” 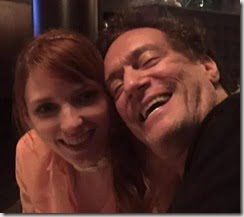 Reports say, Cumia pleaded not guilty and was released on his own recognizance, but he was ordered to stay away from Golightly.

Dani Golightly can be found on Twitter under the handle “dani branmuffins” She describes herself as a “NY comic / romantic af / terrible 1st impressions Just trying to make you laugh. Kinda a goofy girl.”

Cumia  is due back in court on Jan 4.

Dani Golightly can also be found on Tumblr, here.