Juan Rodriguez is the hot boyfriend of the competitive eater, Miki Sudo. Juan who is a competitive eater himself is a proud boyfriend, 32-year-old Miki is a three-time women’s hot dog eating champion and is currently looking to retain her title.

Miki Sudo, is looking to defend her title on July 4 at the 2017 Nathan’s Famous International Hot Dog Eating Contest.

According to her social media, the hot dog eating champ made her first appearance in the world of competitive eating in 2011, after a joke became a dare. She welcomes her first challenge on Dec. 4th, 2011 and, to everyone’s surprise, conquers the 10 lb. Phozilla (rice noodles, meat, and broth) well within the allotted time of 87 minutes. As Pho 87’s first official winner, Miki collects a progressive jackpot of $1510 and is featured on a billboard just off the Las Vegas Strip.

Though Sudo was born in New York she is the daughter of a Japanese father and European American mother. As a child, she lived in Japan for seven years and later returned to the States as a teenager. According to the Las Vegas Weekly, Sudo grew up in New York, Tokyo, Hawaii, and California.

After surf sessions with friends as a kid, she would hit McDonald’s and order a bunch of the tiny, 39-cent cheeseburgers, maybe 10 at a time. It never seemed weird.

Sudo is good at almost everything in the world of competitive eating. Hard-boiled eggs, baby back ribs, and definitely hot dogs. 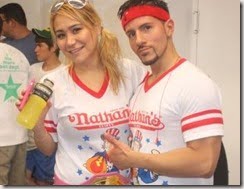 Juan Rodriguez also known as Juan “More Bite” Rodriguez –is a personal trainer and model who lives in Las Vegas, NV but was born in Chicago. He has one brother and one sister.

Rodriguez is known as the “Chip & Dale” of competitive eating, he is proof that you truly can have your cake and eat it too. He rejoices in the fact that he is able to devour ungodly amounts of foods while still sporting a six pack!

He logged a string of impressive performances at the MLE table in 2012, most notably in the Slugburger (23.5 in 10 minutes), Gyoza (146 in 10) and Tamales (60.5 in 12) disciplines. He ate an astonishing 22 Nathan’s Famous hot dogs and buns in his first qualifying attempt and MLE debut. 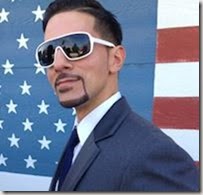 According to his website, Juan Rodriguez is currently ranked 10th in the World of Competitive Eating.

Juan and Miki split up in February 2015.

You can check out Juan Rodriguez on Twitter here.