James Fletcher is the husband of TV journalist and reporter, Brooke Baldwin -whom you may recognice from her work at CNN.

James’ wife has announced she has tested positive for the deadly coronavirus also known as Covid19. The 40-year-old came forward with the news on social media saying she experienced on Thursday a sudden onset of symptom including fever, chills and aches.

Lauren Brooke Baldwin on July 12, 1979. The gorgeous journalist earned a double bachelor’s degree in journalism and Spanish from the University of North Carolina at Chapel Hill. She also studied at the Universidad Ibero Americana in Mexico City.

Baldwin joined CNN in 2008. She previously served as a lead reporter for the 10 p.m. newscast for WTTG in Washington, D.C. At WOWK in Charleston/Huntington, West Virginia, she was the morning anchor.
Baldwin, who is the host of CNN Newsroom with Brooke Baldwin weekday afternoons, has been broadcasting from CNN’s New York City studios.

James Fletcher is actually Brooke’s second husband. The couple has only been married since 2018. The lovely journalist was previously married to Jay David. 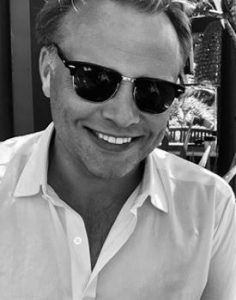 New hubby, James Fletcher hails from England and is a writer, actor and producer. He began dating Brooke around 2015 after first meeting at a holiday party in Atlanta. A bold Brooke invited him to New Orleans, where she was covering New Year’s Eve for CNN. James agreed to join her, and they started dating.
On social media Fletcher describes himself as ‘Producer and Creative Director’ -her also adds ‘I also know how to use a pen and camera. I write, direct, and produce’

James Fletcher popped the question in 2017 during a trip to Hawaii and the two were married in 2018 at Liberty Farms in New York.
Fletcher who is quite private and enjoys keeping a low profile, has been quite supportive of his wife’s career always tagging along wherever she needs to be.