Cliff Watts could be the new man in the life of one of Hollywood’s most recognized faces, actress Halle Berry. So, who is Cliff Watts?

He is widely known for his campaigns for Coty, Hugo Boss, Revlon and Armani as well as his work for Vanity Fair, Vogue, Bazaar, W, Elle and Esquire.

Born in Northern California Watt’s discovered his passion for photography as he traveled the West Indies after art school. His first professional assignments were for Japanese clients. He was soon hired to shoot celebrity portraits for W magazine and fashion for Bergdorf Goodman. While continuing to do photo shoots of and for celebrities and models, Watts started making short films of his subjects.

Watts creates intimate portraits that reveal the sensuality, humor and humanity that lies behind the public image of his subjects. 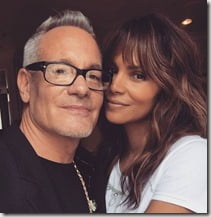 Watts posted a snap of the two of them cheek to cheek and which is tenderly captioned by him:

“cliffwatts@halleberry my love. Such a wonderful human being. Thank you for a great day”

Do you see a possible romantic link? Just the caption alone is very thoughtful and unless he calls every girlfriend ‘my love’ something could be cooking between them.

As we know the 49-year-old beloved actress, has been married more than a couple of times. Halle first tied the knot to baseball player David Justice with whom was married from 1992 until 1997.

She then wedded singer, Eric Benet in 2001, that also ended in divorce in 2005. She was in a long relationship with model Gabriel Aubry with whom she shares a daughter born in 2008.

She left Aubry to marry for the third time to still, husband Olivier Martinez in 2013. Halle and Martinez are the parents to a son born in 2013, they announced their split late in 2015.

Do you think Halle would consider to get married a fourth time? Could Cliff Watts be the next on Halle’s list of husbands?

You can check out Cliff Watts on Instagram here.