Gena’s superstar husband is the eldest son born to an Irish mother, Wilma and a Cherokee Indian father, Ray Norris. His brother, Wieland died in 1970 while serving in Vietnam. His other brother is Aaron Norris.

Chuck was born March 10, 1940 in Ryan, Oklahoma, the martial artist instructor turned actor and movie producer gained fame after appearing in a number of action films and later starring in the television series Walker, Texas Ranger from 1993 until 2001.

Gena’s bearded hubby is celebrating his 77th birthday and with that in mind we can’t help to notice how great he looks, probably in big part thanks to his younger and lovely wife, Gena O’Kelley.

Norris was previously married to first wife, Dianne Holechek. The marriage lasted from 1958 until their divorce in 1988. They produced two children together, son Mike was born in 1963, second son Eric was born in 1964. Norris is also the father of a daughter Dina, out of an extramarital affair. 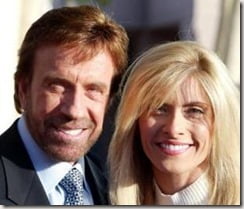 Gena O’Kelley was born in 1953 in California, to parents, Annette M. O’Kelley and Alan Gordon O’Kelley. She has one brother, Eric; and two sisters, Maureen and Elizabeth. According to an obituary, Gena’s father died in 2008.

Gena a former model and actress, met Chuck in 1997 after she had a small role in a TV series. Chuck invited her to Dallas to get to know her better and according to the book of Chuck Against All Odds, their friendship grew into a relationship and before long, Chuck fell for her.

Before meeting Chuck, Gena who is 23 years-his-junior –was also in a previous relationship from which she became the mother of two children: Kelley and Tim Hinschberger from her marriage to Gordon Hinschberger.

At the time of their nuptials with Norris on November 28, 1998, Chuck was 59 and she was 36-years-old. The couple has welcomed two children of their own. Gena O’Kelley gave birth to twins on August 30, 2001: Dakota Alan Norris, a boy, and Danilee Kelly Norris, a girl.

Gena and her hubby are both Christian, they enjoy giving back to society. Her man is known for his work with a number of charities, including Funds for Kids, Veterans Administration National Salute to Hospitalized Veterans, and the United Make-A-Wish Foundation. He is particularly proud of KickStart, a non-profit organization he created with help from President George Bush to help fight drugs and violence in schools.

In 2005, her man reached a new celebrity status after he became an internet sensation with memes based on exaggerated feats of combat, that you’ve probably seen by now.

Gena O’Kelley and her man currently reside in Texas.