Julie Hayden is the lovely wife and co-host of radio personality, Chuck Bonniwell -the wife and husband duo are known for their show on 710 KNUS.

Julie’s husband recently made a rather senseless comment during the couple’s show and as a result they were yanked off the air.
According to reports, Chuck Bonniwell said during a December 17 broadcast that he wished “for a nice school shooting” to interrupt impeachment proceedings.

Julie’s inmediate response to her hubby’s comment was “No, don’t even say that! Don’t call us! Chuck, didn’t say that.”
Though the Chuck and Julie Twitter account issued an apology from Bonniwell -it appears to have caused no effect and the couple’s conservative talk show has been ultimately cancelled. 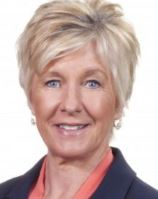 Charles ‘Chuck’ Bonniwell also publishes the Cherry Creek/Glendale Chronicle. Bonniwell graduated from Vanderbilt University with an honors degree in history and received a doctorate in law from the University of Colorado.
He is a founding member of the board of directors of the Colorado Golf Hall of Fame. He and wife Julie -previously hosted Weekend Wakeup on KOA for four years.

Julie Hayden hails from Woodstock, Illinois. She holds a Bachelor’s Degree in Journalism and Mass Communications from Iowa State University.
Prior to her career on radio, she was a TV reporter for over two decades. In fact, she is an Emmy award winning reporter in the Denver TV market. In the past she reported for FOX 31 News, KWGN-TV and KMGH-TV.
She is currently listed as the Director of Marketing at the Cherry Creek/Glendale Chronicle. According to her LinkedIn, the veteran reporter also works in video production to help small businesses achieve their social media and marketing goals.

Julie together with husband Chuck, are the proud parents of one son.