Alba and her much older man were recently caught enjoying themselves at the Hamptons. The alleged new couple has been seen together to a number of swanky high-profile events in the Hamptons.

Peter -know for his connection to Brinkley -is an architect, real estate agent, businessman and entrepreneur originally from New Jersey. He works as an agent at Saunders in Westhampton.

In 1996, architect, Peter Halsey Cook married Christie Brinkley. The couple had one child together before they divorced in 2008. Togethery they are the parents of 21-year-old Sailor Lee Brinkley-Cook -a model like her mom.

The divorce proceedings attracted media attention after Cook admitted that he had an extramarital relationship with an 18-year-old woman and that he was addicted to internet adult videos. He then was caught having *** with his 18-year-old assistant Diana Bianchi, and the supermodel promptly dumped him in 2006.
They ended up going through one of Hollywood’s most hideous breakups, and one of the world’s nastiest divorces. They fought a bitter custody battle over their children, Sailor and Jack, as well as a fierce legal fight over money. 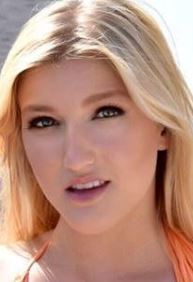 Cook who has been accused of a pathological desire for younger women, has not proven contrary. He’s been linked to a number of younger women. He was married Suzanne Shaw who was with him for seven years and married to him for two and stood by him during his bruising public divorce with Brinkley.
In 2017, Cook was linked to then college student, Zoey Tess and later to another younger woman, Kasey Dexter.

The latest in the list is apparently Alba Jancou -who was first linked to Cook back in July, when the two attended chef Bobby Flay’s Hamptons magazine cover.
Jancou’s LinkedIn page states she’ll be graduating from Tulane University in 2021 and that she attended a prestigious English private boarding school in Somerset called Millfield. She’s also interned at a top New York art gallery.

It seems the blonde in a Hamptons regular, she was pictured attending the Hamptons Magazine Celebration of the Fall Fashion Issue on August 16, 2019 in Water Mill, New York.

Alba has now deleted her LinkedIn page and also set her Instagram on private. She seems to be a popular gal with over 3k followers. She writes on her social media bio ‘Too busy working on my own grass to notice if yours is greener’