Chris Baumgartner is a Tennessean man who has come forward on social media revealing he was patient zero, the first to test positive for COVID-19 in Tennessee.

Chris wrote on Facebook about his experience with the deadly virus saying it has been ‘all over the board,’ confronting not only the virus but ‘mass hysteria,’ while also receiving comfort and hope from his community.
Over the weekend, Chris Baumgartner explained in his post that his case was on the mild end of the spectrum, and that he continues to recover.
Despite the frightening and bizarre situation, Chris Baumgartner explained he and his family ‘also experienced human kindness at its very best.’ People brought meals, groceries, cards, books and games to pass the time while in quarantine. He ended his post inviting us all to #bethechurch.

44-year-old Chris Baumgartner works for Biogen -where he has been the Vice President/ East General Manager since February. According to his LinkedIn, he holds a Bachelors Degree in finance from Austin Peay State University and a Master of Business Administration from University of Florida. Chris also attended Harvard Business School.
Prior to Biogen, he worked at Morgan Stanley, Johnson & Johnson, Novartis and Sage Therapeutics. 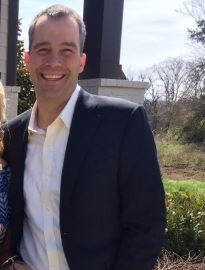 Chris is married to wife, Holly Williams Baumgartner; the couple has a teen son who attends Battle Ground Academy. Both his wife and son previously tested negative for the virus.
According to her social media Holly Williams Baumgartner is originally from Seminole, Florida. She attended Seminole High School and studied Communication Disorders at Florida State University. In addition, she studied Hearing and Speech Sciences at Vanderbilt University.