Sinisa Mackovic is the boyfriend of model, actress and fashion designer Chloe Sevigny -who is currently pregnant with the couple’s first child.

Sinisa’s girlfriend and soon-to-become baby mama worked as a model and magazine intern before her film career began. Born November 18th, 1974; the Connecticut native made her screen debut in Larry Clark’s Kids.
The 90s art-house film star has also had roles in American Psycho and Boys Don’t Cry.
She received an Independent Spirit Award for her performance in Kids. In 2015, she began playing Chelsea O’Bannon on the Netflix series Bloodline.
She’s also recognize for starring in HBO’s Big Love from 2006 to 2011.
The Oscar-nominated and Golden Globe winner actress will appear next in the upcoming HBO mini-series, “We Are Who We Are”

Prior to Sinisa Mackovic Chloe dated filmmaker Harmony Korine, and later dated musician Matt McAuley for eight years. She was last romantically linked to Luka Sabaat.
Chloe and Sinisa have been together for more than a year. 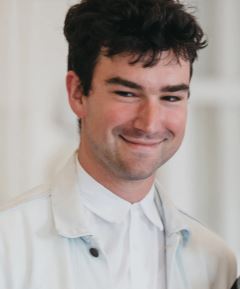 Sinisa Mackovic isn’t exactly an actor or musician, he is however, a New York art gallerist. Mackovic is the current director of Karma Art Gallery in NYC, according to his LinkedIn profile he has worked at Karma since 2011. Unfortunately it appears there’s no much more info on Mackovic. Is safe to say he keeps a low profile and enjoys his privacy despite dating a Hollywood figure.

The 45 year old actress and younger partner Sinisa Mackovic revealed the pregnancy news this week, after the two were caught taking a stroll in New York on Monday alongside a fairly prominent bump. She is believed to be about five months pregnant. Congrats to the expectant couple!