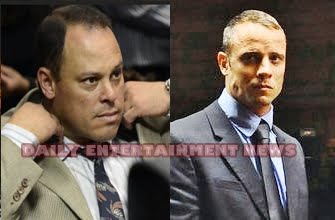 Botha was the first witness to testify on behalf of the state. He arrived in Pistorius’s house at 4:15am on Valentine’s morning. Pistorius girlfriend, Reeva Steenkamp, was already dead, wearing shorts, a black vest and she was covered in towels.

Prosecutor Gerrie Nel told the court that an unnamed witness “heard talking that sounded like non-stop fighting from two to three in the morning” shortly before Steenkamp was found dead at Pistorius’s Pretoria home last Thursday.

Pistorius said in court Tuesday that he and his girlfriend Reeva had gone to bed and that when he awoke during the night he detected what he thought was an intruder in the bathroom. He testified that he grabbed his 9 mm pistol and fired into the bathroom door, only to discover later to his horror that Steenkamp was there, mortally wounded.

Detective Hilton Botha said the trajectory of the bullets showed the gun was fired pointed down and from a height. Prosecutor Gerrie Nel has said the killing was premeditated because Pistorius took time to put on his prosthetic legs before the shooting.

Botha added: “I believe that he knew that Reeva was in the bathroom and he shot four shots through the door.”

Botha said the shots were not fired straight at the toilet door, but rather “directly to the toilet, the basin itself.”

“If you walk in directly and fire straight at the door you will miss the toilet,” he said, suggesting Pistorius had been aiming.

Hilton said Steenkamp was shot in the head over her right ear and in her right elbow and hip, with both joints broken by the impacts.

Hilton said the holster for the 9 mm pistol was found under the side of the bed on which Steenkamp slept, also implying it would have been impossible for Pistorius to get the gun without realizing that Steenkamp was not in the bed and could have been the person in the bathroom. Botha added that Pistorius did not have a license for a .38-caliber weapon and consequently his possession of ammunition for such a weapon was illegal.

Police also found two iPhones in the bathroom and two BlackBerrys in the bedroom, Hilton said, adding that none had been used to phone for help.

Pistorius career has been put on hold since the shooting, forcing him to cancel races in Australia, Brazil, Britain and the United States between March and May. Two of his American sponsors, Nike and sunglasses maker Oakley, announced they were dropping Pistorius from their advertising campaigns, which have earned him millions of dollars in endorsements. 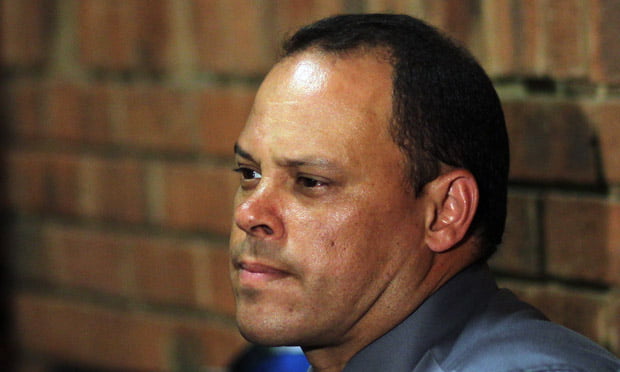 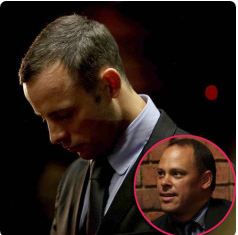 The Oscar Pistorius case took a dramatic twist Thursday after it was known that the detective leading the case, Detective Warrant Officer Hilton Botha, is facing seven charges of attempted murder. Botha and two other officers were accused of shooting to a taxi carrying seven passengers in 2009, according to a spokesperson for the South African police service.

South African news reports said at the time of the alleged shooting in 2009 that Botha and the other officers were pursuing a man accused of murdering and dismembering a woman. The officers were arrested in 2011 and are due to appear in court in May.

“There was a decision taken by the DPP’s office to charge the members, each one of them with seven counts of attempted murder. That was the number of people that were in the taxi,” police spokesman Neville Malila said.

The prosecution said they were unaware of the charges against the detective when they put him on the stand in Pistorius case. Chief prosecutor, Gerrie Nel, began by explaining the attempted murder charges to the court, stating he wanted to put matters on the record.

“The case [against Botha] was originally dropped but now it has been reinstated,” Nel said.

Botha was not present at the time, and when he was brought back to the room, Nel joked:

“There goes my case”.

Prosecution spokesman Medupe Simasiku said he was unsure how the detective’s status will impact the Pistorius case, a day after Botha testified that authorities recovered two boxes of testosterone, along with needles, from Pistorius’ bedroom.

“We can take action and see if we remove him from the investigation or if he stays,” Simasiku said.