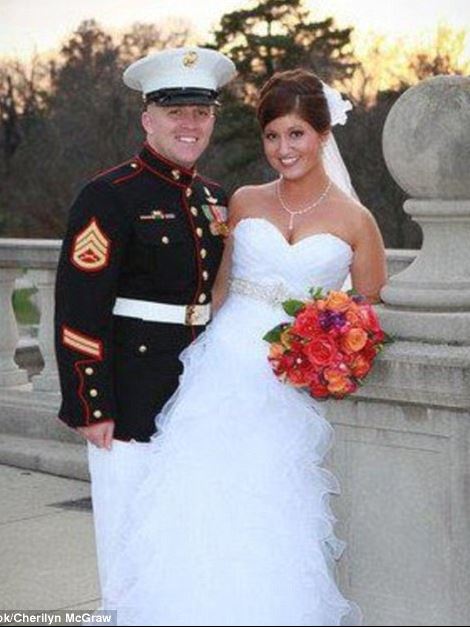 What should have been the trip of a lifetime turned to tragedy for a young couple from North Carolina.

On January 6, of this year, Cherilyn McGraw won a trip to Australia on the Ellen DeGeneres Show by stuffing ***** into her “down under” pants. She and her husband of two years, Marine Sergeant Brandon McGraw, decided to take the trip in December.

Gunnery sergeant McGraw was based at Camp Lejeune in North Carolina. He had served both in Afghanistan and Iraq. The couple was from Huntington and married in November 2011.

They made the long trip from with a stopover this past weekend in New York. Brandon, an extreme sports enthusiast, wanted to go skydiving. He was a well trained, experienced skydiver.Cherilyn jumped first in tandem and then it was Brandon’s turn. In an interview with the newspaper, an employee of the skydiving school said McGraw’s jump was going fine until shortly before landing, when his parachute suddenly veered left and right and he slammed into the ground.

The 33-year-old gunnery sergeant was pronounced dead on the scene at around 12.30pm local time after going into cardiac arrest. His wife was not injured.

Cherilyn, a special education teacher, is heartbroken. She thanked well wishers on her Facebook page, which has since been closed, saying “I’m beyond honored and words will never be able to express my gratitude for all the love, support and prayers, you all have kept me so strong.”

Of her husband she wrote “My hero. My angel, I love you more than anything in the world, honey. You are the most amazing man.”

Our deep felt sympathy goes to Cherilyn and all of Brandon’s family and friends.