Susan Rawnsley has been identified as the first love in the life of Hollywood actor, Channing Tatum.

The actor and dancer gave life to a male stripper in Magic Mike and since, Tatum hasn’t looked back. The Alabama native has also appeared in other successful productions such as Step Up, G.I. Joe, Dear John, 21 Jump Street and The Vow to name a few.

It is now common knowledge that Tatum was perfect for the Magic Mike role since he began stripping in real life when he was just a teen. Though his night gig may have paved the way for his stellar performance on the big screen, it ended his relationship with firt love, Susan Rawnsley. 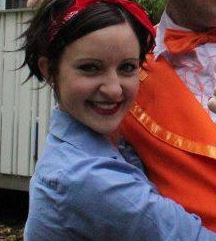 The two dated back in high school for about three years and according to reports, she was far than thriller to find out her boyfriend was taking off his clothes at night in front of strangers. Susan who wanted nothing to do with that world, ended their relationship and in the process broke his heart.

Don’t feel too bad for the 38-year-old actor, in 2009 he tied the knot to the gorgeous Jenna Dewan and has done extremely well in the professional side. However we were shock to learn he and Dewan announced their separation earlier this year. The couple shares one daughter, Everly Elizabeth Maiselle Tatum born in 2013.

Susan Rawnsley and Tatum both graduated from Tampa catholic high school in 1998 and where he was voted most athletic. We’re guessing Susan perhaps regrets breaking of her relationship with Tatum now.

According to online info, Susan Rawnsley now 38, has lived in Conshohocken, PA; Tampa, FL; and King of Prussia, PA. She is also known as Susan Griesser, a Graduate Art Therapy Instructor at Cedar Crest College Art Therapy. She is currently married to Jason Griesser and is the proud mother of three young children.