Cecelia Helen Barrett aka Twitter user Ceci Citra is the woman with whom Mike was caught flirting on Twitter by his wife Mechelle Epps. Cecelia has received hating messages, but should Mike Epps be the responsible here? What do you think? Would you like to know more about Cecelia Helen? Continue reading!

Comedian and father of four Mike Epps has been married to his wife Mechelle Epps for nine years, he was caught flirting with twitter user @ceciCitra identified by DailyEntertainment as Photographer Cecelia Helen Barrett by Mechelle. 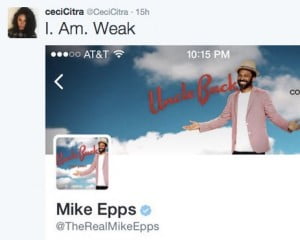 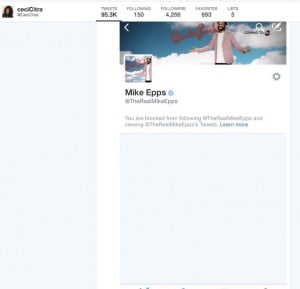 27-year-old Cecelia Helen Barrett from Atlanta, Georgia is today a photographer who has worked with Mtv, National Geographic to name a few, she participated in the 2011th Annual Smithsonian Magazine Photo Contest.

She graduated in 2010 from the University of North Carolina at Chapel Hill and in 2013 from Savannah College of Art and Design.

Fluent in French Cecelia Helen Barrett opened her studio CCB Studio in April, 2010, she partnered with Robert Sims for the creation of The Rose Digital Entertainment. Rose Digital was created in 2012 and focuses on bringing and rebranding the urban culture into the new generation.

Ms. Barrett is mostly known as Cecelia Helen, thanks to her and Epps’s indiscreet Twitter exchange Cecilia or Ceci Citra will be the girl who almost DM Mike Epps.