Anna’s father is an Emmy-award winning CBS producer who back in 2010 pleaded guilty to attempting to extort David Letterman. At the time Halderman had threatened to reveal Letterman’s extramarital affairs, unless the talk show host paid him $2 million to keep quiet.
As a result of a plea deal and a public apology later, Joe got six months in jail, probation and 1,000 hours of community service. 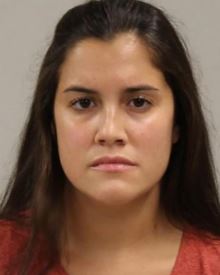 But is now his daughter the one facing issues whit the law as reports say Anna Lee Halderman allegedly stripped down naked on a public beach in Connecticut in front of a young child.
Anna a resident of Norwalk, CT; is said to have stripped out of her entire bikini while at Westport’s Compo Beach. When confronted by a by a parent, who was with her child, the suspect became belligerent. The entire confrontation occurred in front of the young child.
The 28-year-old who later told police she had no recollection of the incident -was arrested on breach of peace and risk of injury to a minor charges. The incident took place last month on broad daylight and the complainant told police that Halderman appeared to be intoxicated at the time.

Anna Lee Halderman was born to Robert Halderman and his ex-wife, Patty Montet -they are also parents to Anna’s younger brother, Jimmy Halderman. The former couple were married in 1990 and divorced in 2004.
According to a LinkedIn, Anna Lee Halderman attended New Canaan High School and obtained her Bachelor of Arts Degree in Communication in 2015 from Colorado State University.
She is listed as an account executive at Cumulus Media.

Anna who apologized for her behavior after police finally identified her, was released after posting bail of $50,000. She is scheduled to appear in Norwalk Superior Court later this month.