Brittany Hathaway is a North Carolina mom who made headlines after her three years old son was reported missing earlier this week.

Brittany made the devastating report three days ago but now authorities reveal her toddler son, Casey Lynn has been found alive. On Thursday night, FBI spokeswoman said Casey Hathaway had been found by professional search and rescue crews near Cayton.

The boy who is described to be in apparent good health, was taken to the hospital for evaluation and has since been reunited with happy mom, Brittany Hathaway. 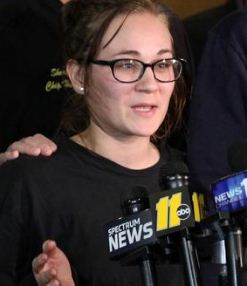 Casey disappeared on Tuesday while playing outside his grandmother’s home. He and two other kids had been playing in the backyard when it is believed he made his way into the thick woods.

The search for Casey began but it had been hampered by heavy rains and strong winds and tensions grew when the sheriff described the search area as dangerous: “The terrain is treacherous. Areas are flooded and filled with sinkholes, even the trained searchers are having trouble navigating safely.”

It is truly something of a miracle the boy survived in the cold temperatures. Authorities said they got a tip of a crying child, Casey was found tangled in briars and had been calling for his mommy. It was a man named Shane Grier who found the boy around 50 yards (45 meters) into the woods.

During the press conference, an emotional Brittany Hathaway thanked Mr. Grier and nearly 600 volunteers who turned out to search for her little boy saying “We just want to tell everyone that we are thankful that you took the time out to search for Casey and pray for him. He is good, he is good,”

Brittany and her husband Christopher Hathaway, are also the proud parents of two other children, Casey’s older sisters.