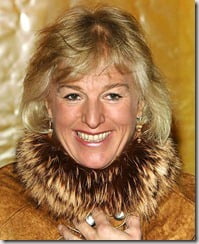 British politician Margaret Thatcher, Baroness Thatcher, died on Monday at the Ritz Hotel in London. Her son Mark and her daughter Carol Thatcher, announced that their mother died peacefully following a stroke. Authorities said she will be buried with military honors, politicians called her influence on her country among the greatest since Winston Churchill.

President Obama said in a tribute released by the White House:

“The world has lost one of the great champions of freedom and liberty, and America has lost a true friend.”

Margaret Thatcher, 87, was Britain’s first female prime minister, serving for 11 years. She was known as the Iron Lady by the Soviet press after a 1976 speech declaring that “the Russians are bent on world dominance”. As Prime Minister, she implemented conservative policies that have come to be known as Thatcherism.

Her daughter, Carol, was born on August 15, 1953 in Kensington, London. She is an English journalist, author and media personality. Her father is Sir Denis Thatcher, First Baronet. Carol has written biographies of both her famous parents. She won the fifth series of the reality show “I’m a Celebrity… Get Me Out of Here!.”

Carol has a twin brother, Sir Mark Thatcher, and were born prematurely. In 1960, Carol was sent to Queenswood School, a girls boarding school in Hertfordshire. Then she studied law at University College London. In 1977, Carol moved to Australia to pursue a journalism career. While she was there, her mother was elected Prime Minister. She has said:

“You need quite good shock absorbers and a sense of humour to be the Prime Minister’s child.”

Carol once told how, for 12 years, she communicated with her mother through secretaries:

“I always had to make appointments to speak to her. I didn’t find it difficult because it was absolutely the norm. Some of the secretaries were my age, so they were the sisters I never had,” she said.

Carol worked on the Sydney Morning Herald from 1977 to 1979. Later she became a TV reporter at Channel Seven and then an interviewer on its morning show. She moved back to Britain, where she worked as a presenter for LBC, BBC Radio 4, and TV-am.

She also wrote travel articles for The Daily Telegraph, but because of her mother’s high profile political position, many newspapers refused to publish her work. Her first book was Diary of an Election: with Margaret Thatcher on the campaign trail, published in 1983. Her second book, Lloyd on Lloyd, became Carol’s first best-seller. It was written in collaboration with tennis player Chris Evert, and published in 1986. In 1996, she published the best-selling biography of her father Below the Parapet. Carol also produced a documentary about him called Married to Maggie, he died shortly after its release.

Carol had a relationship with Jonathan Aitken which ended in 1979. She has also been linked to Marco Grass, a Swiss ski instructor, since 1992, and share homes in Klosters and London, even though Carol has never married, she says:

“I like being permanently single. It suits me perfectly.”

Carol Thatcher’s other work:
– ITV television show I’m a Celebrity…Get Me Out of Here!, 2005.