Carike Botha is the wife of late South African hunter, Theunis Botha –who was horribly killed after an elephant collapsed on top of him.

Carike’s husband was a seasoned professional hunter in South Africa but according to the country’s news outlets, on Friday he and his group stumbled upon a breeding group of elephants at Good Luck Farm near Hwange National Park in Zimbabwe.

According to the park’s spokesperson, the group of elephants attacked Botha’s group and the hunters shot at them.

News 24 reported that Botha was crushed after one of the members of the group shot an elephant after she lifted Botha with her trunk. The elephant collapsed and fell on top of Botha, crushing him. He was 51.

Theunis is survived by his long time wife Carike and their five children. 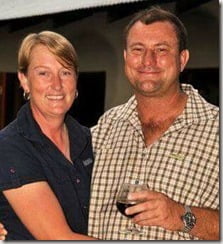 Botha was the owner at Big Game Safaris –a passionate and professional hunting outfitter operation focussed on giving his clients a unique exiting.

Theunis born in 1966, came from one of the pioneering families to move into the wild and rugged region of South Africa bordering the area which would later become the Kruger National Park. his family was big cattle ranchers and hunters.

He joined the family business in 1983 after attending Ben Vorster High school. In 1991 he earned a degree in Psychology & Anthropology after having completed his national service as a sergeant in the South African infantry. 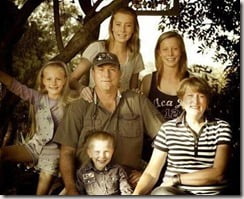 Carike Botha also hails from the same area in South Africa her husband did. The two met while attending the University of Pretoria. At the time she was studying Business Computing.

The college sweethearts went onto marry and together produced five adorable children, including daughter Carmen and Lisa.

Botha’s wife announced his death on their joint Facebook page, according to the Telegraph. The post is no longer available for the public to view.

The wife and mom of five is said to travel this week to bring back her husband’s body to their native country for proper burial.