Bushra Kashmar is the inconsolable wife of Naji Jerf –a Syrian journalist, who exposed ISIS atrocities to the world. Her 38-year-old husband was murdered Sunday, in Turkey. Naji leaves behind a wife and two daughters.

According to reports, Naji Jerf –a well respected figure among peers in Turkey –was gunned in broad daylight with a silenced pistol in a Turkish town near the Syria border.

According to the NY Times, the killing of the journalist, Naji Jerf, in Gaziantep, Turkey, happened on Sunday, one day before he and his family were scheduled to fly to France, where they were seeking asylum.

Naji Jerf –a journalist and filmmaker –documented the horrors by the Islamic State in Syria and trained hundreds of citizen journalists rights activists said Monday, calling the death an assassination.

The killing is believed to have come as Jerf prepared depart for Europe to escape mounting death threats that followed the airing of a film he made about ISIS and its campaign of terror against citizen activists in Aleppo. “ISIS in Aleppo,” chronicling the months when the group ran parts of Syria’s commercial capital and came to be despised by all other groups fighting the Assad regime, was broadcast two weeks ago on the pan-Arab Al-Arabiya satellite news channel.

His death was the latest in a string of killings of activists and observers who have drawn attention to human rights abuses during the nearly five-year civil war in Syria.

In October, Ibrahim Abdel Qader, a co-founder of Raqqa Is Being Slaughtered Silently, and an activist, Fares Hammadi, were killed in southeastern Turkey.

Jerf also served as editor-in-chief of a monthly magazine called Hentah. Images from his funeral in Gaziantep on Monday show mourners holding his coffin and portrait high while marching in the street. 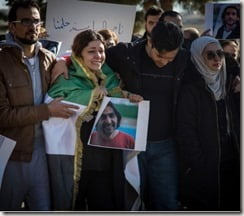 Bushra Kashmar also found as Boshra, is the now widow of Naji. She is also the mother of their two children, daughters Yam and Emsa.

No one has claimed responsibility for Naji’s death yet.