Allison’ son was a 26-year-old St. Lucia native who worked as an accountant. Botham Shem Jean who was unarmed and at his own apartment was fatally shot by former Dallas officer, Amber Guyger -who mistaked Jean for a burglar when she thought she had entered her own apartment.
The killing sparked outrage across the country and drew protesters to Dallas streets. 31-year-old Amber Guyger was sentenced to 10 years in prison on Wednesday.

To prepare for the trial, 52-year-old Allison Jean attended therapy in St. Lucia where she lives. Her late son grew up in the Church of Christ, led worship services at Harding University in Searcy, Arkansas, which he graduated from in 2016, and sang with the Good News Singers, a spiritual a capella group on campus. He was dedicated to charity work, and after his death, his family established a foundation to support community organizations he cared about.
Allison is also the mother to two other adult children, son Brandt Jean and daughter, Allisa Findley -who is a social worker at Baylor University Medical Center in Dallas. Botham was Allison’s middle child. 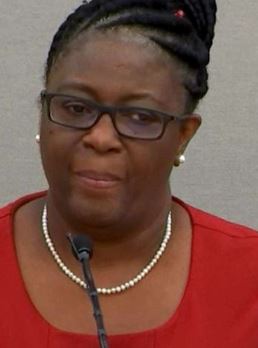 While speaking of her son’s tragic death Allison Jean has stated she believes Guyger would have acted differently if Botham were white.

Listening to the 911 call, Jean said she felt Guyger seemed more concerned about losing her job than about Botham. Jean and her husband have also filed a federal lawsuit against Guyger and the city in October, alleging the former officer used excessive force. A judge granted a stay in the civil case until the completion of the criminal case, said Daryl K. Washington, a Dallas attorney who represents the Jean family.

Allison Jean delivered an emotional statement to the jury that convicted Guyger, “My life has not been the same,” “It’s just been like a roller coaster.”
The devastated mother works as the Chief Executive Officer at National Utilities Regulatory Commission- NURC. According to her LinkedIn, she holds a Bachelor of Science from the University of the West Indies Cave Hill Campus and a Doctorate in Business Admnistration form Walden Univesity.