Robert Sullivan is the longtime husband of pop icon, Bonnie Tyler –whom you probably remember for her 1983 hit, Total Eclipse of the Heart.

Sullivan and the lovely blonde have been married for many years. But before she became an international star, Bonnie was born Gaynor Hopkins on 8 June 1951. The Welsh artist entered a talent singing contest when she was 19, finishing in second place. 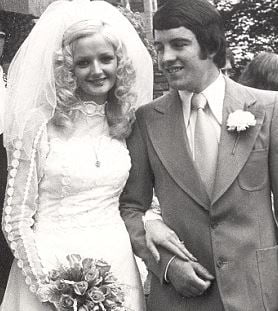 She later landed a record deal with RCA in 1976. Her debut single became an international hit, going top 10 in Britain and becoming a million-seller in America.

Tyler became well known for her distinctive husky voice, achieving success with songs like Lost in France, “More Than a Lover” and “Making Love Out of Nothing at All.” Robert Sullivan is a millionaire property developer. The two have been married for 44 years. Bonnie and Sullivan tied the knot on July 4, 1973.  He is cousins with the father of actress, Catherine Zeta-Jones.

Following their marriage Robert became in charge of their real estate making it grow. Bonnie said during an interview He’s reinvested everything I’ve made and made it a lot better, which is just as well because I’d give too much away.’

The two own a mansion in Mumbles, South Wales, 17 houses and stables in Berkshire, a farm in New Zealand, land in Portugal plus a home there in the Algarve where their yacht is moored in the harbour and where they spend half the year.

During their long time marriage the couple has also had their fair share of heartaches and scandals. When Bonnie turned 39, she became pregnant with their first child but she had a miscarriage after two months. They tried but she never got pregnant again. The couple has no children.

In 2016, reports accusing Sullivan of having an affair surfaced. Meghann Pernot claimed she and Sullivan enjoyed an 18-month affair after meeting him backstage, at one of Bonnie’s concerts.

True or not, Bonnie and Robert Sullivan are still together.