According to Star magazine, 25-year-old Chester Hanks has been missing for about a month, the son of beloved Hollywood couple, Rita Wilson and Tom Hanks, allegedly had been showing signs of trouble after it was though he had been doing better following a stint in rehab.

Sources tell the magazine, Chet got into a fight with bouncers at The Vault nightclub in L.A. last March then in June, he allegedly trashed a hotel room ‘drunk on Champagne and vodka.”

According to the Bella Cheveux website, the hair studio, offers a full range of beauty services including cuts, color, keratin treatments, waxing, and make-up. 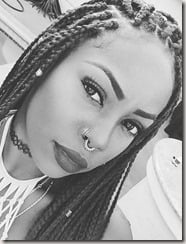 According to the Mirror, a rep for Hanks denied he was missing but his whereabouts are still not clear, the young musician has not been active on social media since mid July and the only sign of him so far is a photo posted by Bella on August 26. The image shows Chet and Bella Cheveux very close to one another.

The Instagram image is captioned with hashtags #tbt #meandbae which can indicate they are together but also notes that it is a #tbt post, meaning that the photo was taken at a past date. It is unclear if that date falls within the time Chet has been missing, the exact date of the photo is unknown.

Bella’s alleged boyfriend had spent 9-months in rehab but his troubled self apparently relapsed as police investigated claims he smashed up a hotel room. He had been showing some signals on Instagram posting defiant messages. According to RadarOnline, his cellphone was allegedly tracked to the California desert town of Barstow, which is known as “the methamphetamine capital of California.”