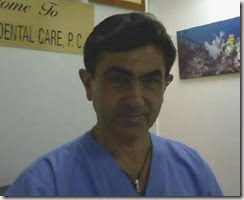 Rego Park dentist Bedros Yavru-Sakuk was caught on tape molesting a 19-year-old patient. The 62-year-old allegedly rubbed his elbow on the crotch of the teenager in two different occasions, between September 2012 and April 2013.

“The charges in this case are disturbing,” said District Attorney Richard A. Brown. “The defendant is accused of taking advantage of his position of power and abusing his patient while he was supposed to be treating her. This is a serious breach of trust and cannot go unpunished.”

The criminal complaint says the dentist first molested the teenager last September during an appointment. But when she returned for her six-month checkup two weeks ago, she prepared herself by taking a small, key-sized video camera hidden in her hand, according to sources.

The teen videotaped him in the sick act and turned the video to cops. Yavru-Sakuk has been charged with third-degree sexual abuse and faces up to three months in jail if convicted. He was arraigned and released Monday. He is set to return to court on June 20.

Bedros Yavru-Sakuk was previously convicted on the same charges on a 17-year-old girl.

Bedros Yavru-Sakuk is a dentist at HY Quality Dental Care. He is an Edgewater, New Jersey resident.