Bal Gill is the woman who learned about her breast cancer after a visit to an Edinburgh museum.

It was in May that Mrs. Gill visited the Camera Obscura & World of Illusions with her family and got the shock of her life after getting into the museum’s thermal camera -which showed a heat spot on her breast.
The Thermal Camera, which was installed in 2009, is a popular part of the top Edinburgh attraction, and lets visitors see a visual of all their body hot spots.

Gill noticed a red patch around her left breast and learned that the thermal imaging has been used to help find cancers in the USA. After returning home, she made an appointment with her doctor and was diagnosed with breast cancer.
Thanks to the startling discovery at Camera Obscura, Bal’s cancer was spotted in the early stages. 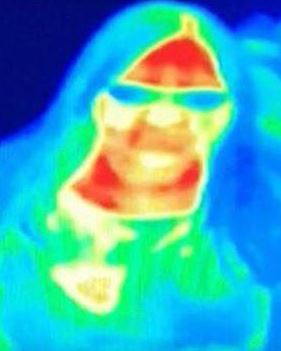 What’s most shocking is that she and her family visited the museum completely by chance while on a three-day trip to the capital.
She told media outlets
“[The diagnosis] was done really quickly. I had an MRI, ultrasound and biopsy, and I think it was all done and dusted by July time.
“What I have is stage zero breast cancer and it’s called DCIS (ductal carcinoma in situ). That’s what makes it even more quirky is that it was so early.
Since then, has received two surgeries so far and has one more due in November to prevent the cancer from spreading. She had srugery and mastectomy on the left breast.

41-year-old Bal Gill is originally from Slough and lives in Berkshire. She is deputy director of finance at a university. Thgouh she’s been in recovery the mom says she felt so grateful for Camera Obscura.