Serena’s Hollywood beau is best known for his role as Tom Haverford on the NBC series Parks and Recreation. He has also appeared in such movies as 30 Minutes or Less, Ice Age: Continental Drift, and Funny People. In 2015, he began starring on his own Netflix series titled Master of None.
Born to Indian parents, Aziz majored in the field of marketing while studying at New York University.

In 2015, he released his first book, Modern Romance: An Investigation. He became the first Asian to win best actor in a TV comedy at the 2018 Golden Globes for his role in Master of None.
Prior to Serena he was romantically linked to professional chef, Courtney McBroom -whom he dated for two years. He was then linked to actress Jennifer Lawrence but the rumor was never confirmed. 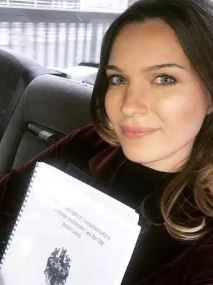 Serena Skov Campbell and Aziz were first spotted together in 2018. The two have been in a number of outings together. They’ve been pictured walking the streets of NY and also attending the U.S. Open Tennis Championship. Serena Campbell and Aziz couldnt be in more opposite fields.

The 30-year-old blonde happens to be a Ph.D. student at King’s College in London. Her studies focus on physics and, specifically, plasmonics.
According to the Daily Mail, she has worked on a British satellite project that touches on her specialty and traveled to South Korea for a big conference in her field. Serena who has been living in London for the past few years often travels to Denmark -where her mother Kirsten still lives.
Campbell is also a mentor to a British project to launch a satellite which will seek to find out the weather patterns on planets outside the solar system using the ultra-violet light spectrum, part of her expertise.

Serena also stunned when she decided not to put much attention when last year her man was accused of sexual misconduct.

Since being in a relationship whit the Emmy winner, Serena has kept her Instagram set to private.