Austin Clay has been named as the man who was accused of destroying the Hollywood star belonging to president Trump.

Earlier this week Clay destroyed Trump’s Hollywood star on the walk of fame. He was arrested and his bail was set at $20,000 for felony vandalism. A Go Fund Me page for Austin Clay was set up in order to bail him out.

According to reports, Clay turned himself in to police and confessed to his crime. Trump’s star is located off Hollywood Boulevard and Highland Avenue. Clay allegedly did what he did by using a pickax. He destroyed the most of it at around three in the afternoon. 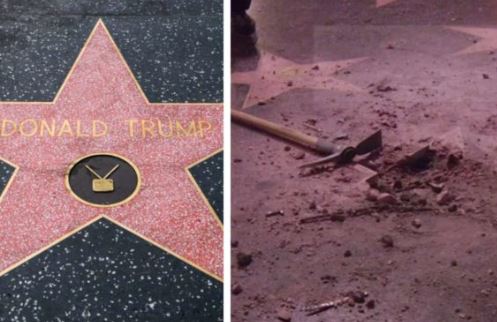 According to jail records, 24-year-old Austin Mikel Clay was born November 28, 1993. The California native worked until recently as a package handler according to a LinkedIn profile. It is believed he is the same Austin Clay who graduated from Lincoln High School in 2011.

The reason for Clay’s recent actions are yet to be determined. Clay who called on himself and told police ‘see you soon’ is the most recent vandal of Trump’s Hollywood star but this is not the first time Trump’s star endures acts of vandalism.

Since the 2016 presidential campaign, Trump’s star has endured several publicized episodes of vandalism, including a spray-painted swastika and “mute” icon. Other who have pass by have been seen stomping on it, spitting on it and writing on it. A photo of a pile of dog **** on the star went viral a few years ago as well.

Also in October of 2016, a man was caught on video bashing the star with a sledgehammer. He was charged with felony vandalism.