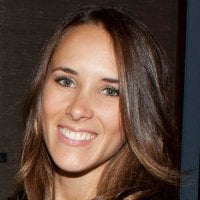 Aubrianna Atwell has had a truly devastating week. About a week ago her father, David Atwell, passed away from lung and throat cancer, and this past Saturday she received a phone call informing her that her best friend, Paul Walker, had died in a car accident.

Aubrianna, 28, is a model and a real estate broker. She started modeling at age sixteen, which is when she met Paul while at modeling school. She met him at the Hollywood Canteen, and they became friends. Eventually they began dating off and on for several years and lived together briefly in Santa Monica and Santa Barbara.

They always remained best of friends speaking weekly and even traveling together to different places, including South Africa and Paris. For her birthday in April of this year, Paul took her to San Francisco to see a Giants game.

Before he died, Aubrianna’s father had written an email to Paul thanking him for being there for his daughter. Paul had intended to accompany her to her father’s funeral service which is to be held on the 8th of December.

Aubrianna says of Paul, “He was the most generous, unconditionally loving person I’ve known. He gave everything.” She goes on to say, “These were the two loves of my life and the most important men in my life. I am devastated. I will live my life to the fullest extent for my father and Paul.”