Louis Eisner is the boyfriend of one half of the Olsen twins, Ashley Olsen –and the two seem to be getting pretty serious.

According to reports, 32-year-old Alshey has left her home in New York –which was close to her sister, Mary Kate –to move with boyfriend in a new pad, located in the in New York’s Hamptons.

But the blonde isn’t the only one making adjustments, it appears Eisner also had to pack up his studio in Mexico and his place in Los Angeles so they could be together and spent more time with each other.

You see, Louis Eisner happens to be an artist –that’s why the studio part.

Mary Kate and Ashley born June 13, 1986 –came to prominence as they both shared the role of Michelle Tanner on Full House for the entire run of the series. They both lead more private lives now but have worked hard to where they are. In 2007, they were both ranked among the world’s richest women in entertainment with a net worth of $100 million. Their company Dualstar is behind multiple film and TV projects, in addition they are active in the fashion world. 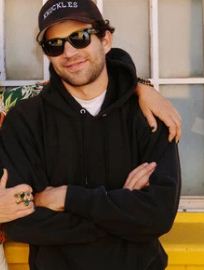 When it comes to love, Ashley was previously linked to a much older man, financier and art collector Richard Sachs.

She began dating current boyfriend Eisner in 2017. The two were friends for years before deciding to give dating a try. The couple met through mutual high school friends in Los Angeles and have now been in a romantic relationship for nearly two years.

Louis Eisner was born in 1988, his mother Lisa Eisner, is a jewelry designer and former actress who is also close to Ashley. As you may imagine, he was exposed to art at an early age. Louis has a brother named Charlie.

Louis graduated from Columbia University in 2010 and also did an internship at Sotheby’s, where he was introduced to art history.

According to a profile, he’s had numerous solo and group exhibitions both in the US and abroad. Louis’s work focuses more on paintings and illustrations.