Renee’s son is currently jailed in Sweden, the 30-year-old has been charged with assault causing actual bodily harm and reports say he will remain in custody until a trial takes place.
The rapper was arrested in July after he was involved in a fight with two other men. Mayers has claimed self defense but the fight was caught on video and the Swedish prosecutor says a crime has been committed despite self defense claims.
The rapper first gained fame with his LiveLoveA$AP mix tape. His first studio album Long. Live. ASAP debuted at #1 on the Billboard 200 in 2013 and earned him a nomination for a BET Award for Best Male Hip-Hop Artist. In 2015 he followed up his commercial debut with At. Long. Last. A$AP. 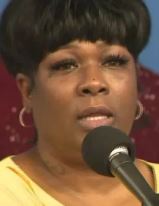 Renee Black welcomed her musicaly gifted son on October 3, 1988. Renee who is a hip hop lover herself, named her son after Rakim & Eric B.
Renee and a young Asap endured many hardships during his early years. The Harlem, NY native had a rough childhood and spent a good part of his early years camping out in shelters with his single mother. Renee was left s single mom of three after her baby daddy was jailed.
Renee Black is also the mother of Rocky’s two late siblings; sister Erika who died in 2016 and a brother, Ricky who was tragically killed when Asap was in his teens. Following his brother’s death Asap decided to turn to music.

Renee who is her son’s biggest fan and supporter recently visited him in jail in Sweeden and spoke to a Swedish newspaper saying: “I don’t even want to think about or say it. I really don’t. I don’t want to rock any boats. I don’t want to stir up any trouble, anything that is going to cause my son not to be released and be able to come home. I’m pleading, I hope, that they let my son home. I really do.”