Anna Ng is a Bronx resident who claims she was the victim of a hate crime, after a another woman left her with a wound in her head.

Anna Ng who was born in China but raised in New York, says she was attacked by a woman with an umbrella. The 51-year-old told outlets she needed four stitches March 28 to close the gash on her head.
Anna Ng says she is now fearful for her life and the life of her children, and told media she is afraid to go out. She is one of several Asian victims targeted in coronavirus-related hate crimes this year.

Anna said the attack began while she was waiting for her bus after doing some sopping at a BJ’s Wholesale Club in the Bronx. Suddenly, she says she was surrounded by four young women, who began asking about her origins. When Anna Ng confirmed she was from China, they called her ‘Chinese coronavirus’ several times.
They all got in the bus, Anna in the front seats while the teenager group piled into the back of the bus. During the whole ride they kept yelling the same slur at Ng. 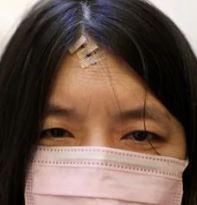 When the teens got off the bus, one of them struck her with an umbrella, ripping flesh and drawing a gush of blood while the others took photos. A surveillance camera shows a young woman with a black jacket leaning over a bar on the bus and reaching to make her attack on Anna Ng.
Moments later, three of the four teens were arrested and charged with hate crime assaults, menacing and harassment.

Ng is a Bronx resident and is a stay at home mom who is also disable since she can’t read or write. The mom of three says she would normally be accompanied by one of her children but this time she went alone, she also said she is still having headaches resulting from the attack and said it was the very first time she had been a victim of racism.