Anjali Ramkissoon is the woman who saw herself involved in a bizarre attack against an Uber driver. The 30-year-old recently stepped forward and said during an interview in Good Morning America she was sorry and very ashamed.

A few days ago Anjali Ramkissoon was caught on camera on a drunk rant, hitting and screaming at an Uber driver. She was identified by Miami Local 10.

The video, posted Tuesday by Youtube user JuanCinco, shows Ramkissoon attempt to get in an Uber vehicle, then proceed to throw everything out of the driver’s car.

When Anjali Ramkissoon is not hitting Uber drivers, she keeps busy as a fourth-year neurology resident.

Dr. Anjali Ramkissoon, happens to be employed by the Jackson Health System. Ever since the video of her assaulting the driver went viral, she was placed on administrative leave. Jackson Memorial Medical Center released a statement on January 21st:

“Anjali Ramkissoon, a fourth-year neurology resident employed by Jackson Health System, has been placed on administrative leave, effective immediately, and removed from all clinical duties. Jackson has launched an internal investigation. The outcome of the investigation will determine if any disciplinary action will be taken, up to and including termination.” 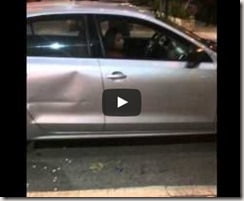 Anjali Ramkissoon has been seriously scolded by online users who have voiced their contempt among the several sites listing her for her services.

Wow!!! A perfect example of what’s wrong with our country today. You, Ms. Ramkissoon, are a self-centered spoiled brat that has obviously never been held accountable for any of wrong doing.

During her interview on Wednesday Anjali Ramkissoon blamed the whole thing on having ‘the worst night of her life’ She told that day her father had been taken to the hospital and right before she snapped at the driver, she and her boyfriend had broken up. 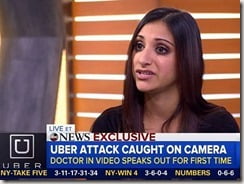 As explained by the YouTube user who posted the video, the footage starts when Anjali Ramkissoon gets inside the car. By this point she had already scared off the real passenger for which the Uber driver had arrived to that location. Apparently Anjali Ramkissoon got upset when the driver told her he wont take her anywhere. She takes his car keys and start walking.

The Uber driver appears to have control of Ramkissoon early in the video, holding her wrists in an attempt to restrain her. She attempts to free herself by kneeing the driver in the groin, resulting in the driver shoving Ramkissoon to the ground and making a break for his car.

When he gets to his car, Ramkissoon gets in on the passenger side and begins to berate the driver.

The driver then exist the car and she begins throwing his belongings outside the car.

According to witnesses Anjali Ramkissoon offers money to the driver after police arrived. The driver didn’t press any charges. Uber however, suspended her account.

She has one sister, Kavita Ramkissoon –who works for the firm Kanner & Pintaluga as an associate attorney, specializing in accidents and injuries. Her mother, Patricia Ramkissoon worked as a secretary a the University of Miami School of Medicine from 1983 to 1988.