Britainy Beshear is the proud wife of Andy Beshear -the Attorney General and newly elected governor of Kentucky.

Britainy’s husband followed into the steps of his father, Steve Beshear -who served as Governor of Kentucky, who served from 2007 to 2015.
Born Andrew Graham Beshear on November 29, 1977; the Kentucky native attended Henry Clay High School. He graduated magna *** laude with a bachelor’s degree in political science and anthropology from Vanderbilt University. He received his Juris Doctor from the University of Virginia School of Law.
Andy has served as Attorney General of Kentucky since 2016. Prior to being elected, Andy spent more than a decade in private practice, where he was recognized as one of the Best Lawyers in America four consecutive years. 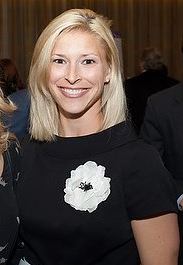 He is happily married to lovely wife, Britainy -Journey of Hope Committee Chair and Maryhurst Board Member.

She is the mother of the couple’s two young children, Will and Lila. Along with her husband, Britainy is a deacon at Beargrass Christian Church. The couple has been married since 2006.
With her husband’s win as the new governor, his wife also gains a new title; Kentucky First Lady Britainy Beshear. The pretty blonde is described as a passionate advocate for kids and families.
In 2016, the spouse and mom of two founded Hope Gallery in Frankfort -to raise awareness of child abuse problems in Kentucky and to educate the public about art therapy.

She also serves on the board of Maryhurst -a counseling program that works with families to help protect children’s safety in a state with the highest child abuse rate.