Amy Whelan is definitely the envy of millions of girls around the world. The hot hairdresser spotted singer Harry Styles in her local supermarket and took advantage of her lucky stars to take a selfie with the pop idol.

Following the snap, 20-year-old Amy Whelan did what any other One Direction fan would have done and it’s also the logical thing to do! She posted the photo to her Instagram account.

Even though she got many likes, Amy Whelan was also the victim of death threats. Amy Whelan is not the first fan to get this kind of reaction from other fans obsessed with Harry Styles or any other band member.

According to the Daily Mail, Amy Whelan bumped into the One Direction singer as he was shopping at Waitrose in London when she took a quick snap.
She captioned the image: ‘Quick little selfie with Harry Styles’

It wasn’t long before Amy received the death threat, that said: ‘If you don’t tell me where Harry Styles is, I will kill you.’

Amy Whelan revealed to FEMALE she in fact, likes Harry but she is not a big fan of the band. She also admitted she was stunned by peoples reaction to the photo, which has been liked nearly 4,000 times and garnered hundreds of comments.

Amy Whelan currently works at a salon in Temple Fortune. She said she was washing a clients hair when she heard Harry was around. 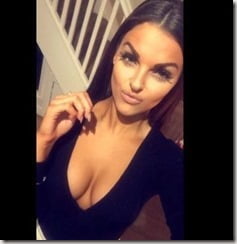 Could she become Harry’s new girlfriend? She definitely has the look to date a major star like Styles. Plus media says she has a resemblance to Harry’s rumored girlfriend Kendall Jenner, what do you think?

Amy said about Harry: ‘Harry seemed really nice. He was a real gentleman and just took it all in his stride as a bit of fun.”

The hot gal, said she returned to work after taking the picture, not thinking more to it.

Rumors are surrounding the band saying they might be thinking about breaking up. This would be a hard blow for the band’s fan base.

According to US Weekly, Five months after announcing they would begin an extended hiatus in March, One Direction’s Louis Tomlinson, Niall Horan, Liam Payne and Harry Styles will split.