Amy Brousseau is the wife of officer Edward Nero, who was charged in the death of Freddie Gray last year. It is a happy day for Amy and her husband who just got acquitted on all charges by a judge this very morning!

Her husband, who was charged with reckless endangerment, two counts of official misconduct, and assault, was accused of unlawfully arresting Gray and with endangering him by placing him in a transport van without a seatbelt.

Nero is the second officer tried for Gray’s death, and the first to receive a verdict; he opted to receive a bench trial, meaning that his case was decided by a judge, without a jury.

Freddie Gray’s in custody death resulted in violent riots that lasted over a week last year. Gray, a 25-year-old black man from the Sandtown area of Baltimore, died on April 19, 2015.

Prosecutors have said that Gray complained of having trouble breathing and asked for medical help as he was driven in the van. When he arrived at a police substation, he was unconscious. A week later, Gray died at a hospital from a spinal injury.

Although Nero was found not guilty, his status with the Baltimore Police Department has not changed, spokesman T.J. Smith said in a statement Monday. The internal investigation is still ongoing, therefore he will remain in an administrative capacity while the investigation continues.

Amy’s husband joined the police force in 2012. He earned a $44,773 annual salary in 2014 and lives in a Cape Cod-style home near Bel Air Middle School. Nero and wife, Amy Brousseau, have been living in the area since 2015. Public records indicate that couple also lived in Sewell, N.J. 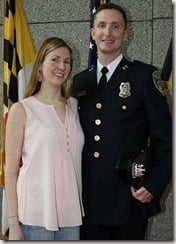 He attended local high school, Washington Township graduating in 2004. Nero was a volunteer firefighter between 2002 and 2012 with the Washington Township Fire Department in New Jersey, according to The Courier-Post, a New Jersey newspaper. The son of Edward Michael Nero –who told papers back in 2015, “I’m sure he’ll be acquitted.”

Amy Brousseau and Nero are the parents of a small daughter. According to online info, Amy Kristen Brousseau currently resides in Rosedale, Maryland. The 32-year-old has worked for Phh Mortgage, Toyota and Dics Makers.

Amy Brousseau has been married to officer Nero Since May 23, 2010. According to her Facebook page, she is currently a stay at home mom and attended Deerfield Beach High School.