Nily Zuckerman is the longtime wife of renowned Israeli novelist, Amos Oz –author of books including Black Box, A Tale of Love and Darkness and In the Land of Israelwho.

According to reports, Nily’s husband died at the age of 79, from cancer. He is widely known as the author of 19 works of fiction, hundreds of essays and articles about modern Israel and a longtime candidate for the Nobel Prize for literature.

He was born Amos Klausner in 1939 to a family of scholars who had emigrated from Russia in the early 1920s and later settled in Jerusalem. At fifteen he left home for Kibbutz Hulda. He and his family later lived in Arad. 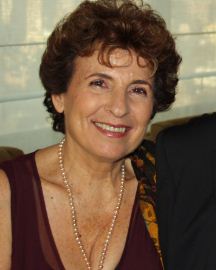 Oz studied philosophy and literature at Hebrew University in Jerusalem and later fought as a reserve soldier in the 1967 Six-Day War in Sinai and on the Golan Heights in the 1973 Yom Kippur War. Apart from a dozen novels and some collections of short stories, he published three books of essays, mostly concerned with the Arab-Israeli conflict. He is considered one of the earliest activists of the Peace Now movement, advocating a compromise between the two communities based on mutual acceptance, cooperation and the sharing of land.

Nily met her husband at the Kibbutz, when they were both fifteen. Nily, the daughter of the librarian of the kibbutz –married Amos on April 5, 1960.

She is the mother of the couple’s three children.  She gave birth to two daughters who are now married, Fania and Gallia. They also welcomed a son, Daniel in the late 80’s and whom the labeled —“the child of our old age.”

Daughter Fania, is Haifa University historian. Daniel Oz happens to be a poet and musician. He received his BA in philosophy from Ben Gurion University of the Negev, studied in a graduate program at Tel Aviv University, as well as briefly studying music at the Rimon School. He is the author of two books of poetry and one of what he calls “flash fables”, Oz currently resides in New York City.

According to a 1996 interview in the Paris Review, Nily Zuckerman –a wife and mother –also, used to run the International Artists’ Colony in Arad, where artists from all over the world live and work for a period of eight months.