Meet 27-year-old Amber Roof, the older sister of Dylann Roof 21, –who shot and killed 9 people inside the Emanuel AME Church on Wednesday.

According to reports, Amber –who was set to be married this Sunday –came to the heartbreaking realization, that her brother could’ve been the suspect in the Charleston church shooting after she saw surveillance photos on TV; she then called authorities to report her own brother.

The Daily Mail reports, FBI sources revealed the blonde called authorities on Wednesday. It was her call that led agents to an overnight manhunt that ended with Dylann’s arrest yesterday after a tip from Debbie Dills, alerted authorities of Roof’s presence in Shelby, North Carolina. 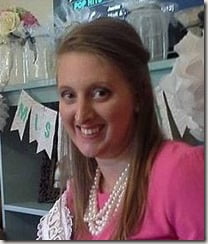 PinAmber, the daughter of Amy and Bennett Roof, was supposed to get hitched this Sunday, to groom, Michael Tyo –who is a US Army Reserve Recruiter –but due to the tragic events, the wedding has been called off.

According to website The Knot, Dylann was not named as part of the wedding celebrations. Amber and Dylann have another sister by the name of Morgan Roof –a freshman in high school.

Amber and her groom –who is also a father of three and popped the question on November 1 last year at Rock Ranch in Georgia –were to be married at The Mitchell House and Gardens in Lexington, South Carolina. Amber’s grandfather was to perform the ceremony.