Dave Bugliari is the proud husband of actress and #MeToo advocate, Alyssa Milano.

Dave and his actress wife have been married for a decade and are the proud parents of two young kids. His wife of 10-years is well known for her work on shows like Who’s the Boss? And Charmed; most recently she also appeared on the UK drama series Mistresses and later began starring in Netflix’s Insatiable in 2018.

Dave is also in the entertainment industry but let’s just say his work is more of a behind the camera sort of thing. Unlike, Milano, who starred acting at a young age –Dave is a Hollywood talent agent.

Dave Bugliari was born December 17, 1980; to Miller and Elizabeth Bugliari and has two older brothers, Miller and Anthony. The New Jersey native attended Pingry School –where his father was the head coach for soccer since 1960.

Dave, started dating Alyssa in the mid-2000s and got engaged in 2008. The two met through mutual connections and he even represented Milano as her agent. 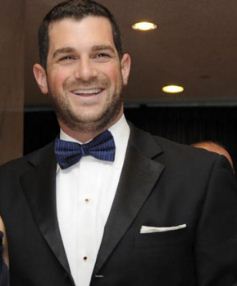 The two tied the knot in 2009, it was the second marriage for the former child actress who was previously married to musician, Cinjun Tate in 1999.

Since their nuptials, Dave and Alyssa have welcomed two children together, their son Milo, born in 2011 and daughter, Elizabella born in 2014.

Dave has worked for Creative Artists Agency for years and is currently the Co-Head, Motion Picture Talent at CAA.

Is safe to say the husband and father of two keeps a low profile and is perfectly fine with his wife taking the spotlight. The 46-year-old actress recently made headlines after she offered her support to former VP Joe Biden –after he was accused by two women of inappropriately touching them.