Alyssa Logan is the pretty blonde who was hired by HGTV stars, Tarek and Christina El Moussa to take care of their two children, instead she’s been accused of having an affair with Tarek.

Is one of those stories we’ve heard one too many times, the nanny that bangs the rich/famous daddy. By now you’ve probably heard Tarek and wife of 7-years, Christina confirmed they’ve been separated since May; while Chisrtina was said to have been dating their former contractor, Tarek is now being slammed for dating their nanny, Alyssa Logan.

Alyssa Logan’s boss Tarek received his real estate license when he was 21 years old. According to his HGTV profile, he quickly made a name for himself in Orange County, Calif.

At the height of the housing boom, he was selling multi-million dollar mansions like hotcakes, but when the housing bubble burst, his empire came crashing down and he had to determine another way to pursue his real estate passion.

That’s how he ended up ‘flipping’ houses and teaming up with with then happy wife, Christina.

The husband-wife duo carved out a new niche in the world of real estate: flipping distressed properties. While Tarek was in charge of buying foreclosures, short sales and REOs for cash, Christina would renovate the place.

It all came crashing down when the two had an argument last April. According to reports, the couple had an argument and when Tarek left their home with a gun to ‘blow off some steam’ Christina called cops saying her might take his life.

They haven’t been the same since, but now is being reported the couple could’ve been arguing for Tarek’s alleged relationship with nanny, Alyssa Logan. 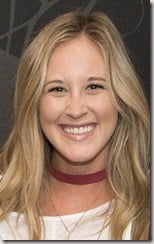 According to gossip site TMZ, Tarek developed feeling for the beautiful nanny during the time she took care of his two kids: 6-year-old daughter Taylor and 15-month-old son, Brayde.

Tarek decided to fire Alyssa and began dating her in September.

However, the alleged couple had a short fling when they parted ways the following month. During their romance Alyssa Logan and Tarek were spotted attending a Florida Georgia Line concert.

Aside from being the nanny, 23-year-old Alyssa Logan also performed some duties as their assistant at the same time. Not much more is known about her other than the fact she likes country music and married fellas.

Alright, to be fair, if you noticed, they didn’t began dating until Tarek and Christina had separated. Question is, should we believe them?

According to her LinkedIn, Alyssa Logan is a Behavior Interventionist at Sage Behavior Services, Inc. She holds a Bachelor’s Degree, Sociology from California State University-Fullerton.

Do you think the El Mousass’ have a chance?